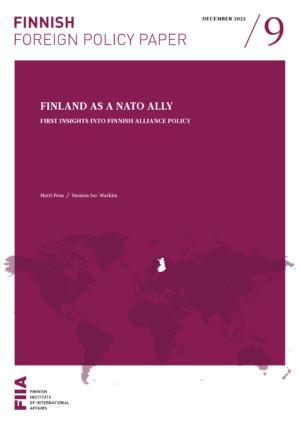 This Finnish Foreign Policy Paper delves into Finland’s emergent NATO policy, identifying and analysing its underlying factors and rationales. In addition to tracing the contours of Finland’s embryonic approach towards alliance politics, the paper also aims to shed light on the alliance Finland is joining, describing both the evolution of, and recent trends in, several areas of NATO activity, and discussing what these mean for Finland.

Finland’s primary objectives within NATO will stem from its geostrategic position at the intersection between the Baltic Sea region and the High North, its location in the NATO-Russia frontline, as well as its peripherality vis-à-vis Western centres of military and industrial power. Finland’s aims will relate to the alliance’s command and force structure and operational planning. From the Finnish perspective, NATO should have a functional command structure, as well as sufficient forces and operational plans in order to be capable of reinforcing Northern Europe and Finland. Due to its strategic location, military capabilities and niche expertise, Finland should be well-placed to promote its interests efficiently and successfully.