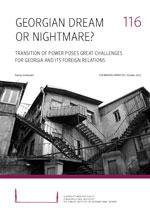 The victory of the Georgian Dream Coalition (GDC) over the United National Movement (UNM) has brought pluralism into Georgian policymaking.

Until the power shifts from the President to the Prime Minister in 2013, the country will be led by an awkward dual power.

New leadership offers great opportunities for Georgia. It can improve its democratic system and economic growth and establish a dialogue with Russia and the breakaway districts of Abkhazia and South Ossetia. This would alleviate the frozen conflict and tense security dilemma on the boundary lines.

If the transition of power does not go well, there will be prolonged power struggles that could cripple the policymaking and cast Georgia back to pre-Saakashvili times.

Saakashvili’s UNM is still a very significant player in Georgian politics and it is important for the GDC and the UNM to find a way to cooperate.