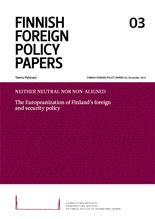 Since joining the European Union in 1995, Finland has both adapted to the EU and its common foreign, security and defence policies as well as tried to influence these policies. In other words, the Finnish foreign and security policy has been Europeanized.

Participation in the EU’s foreign, security and defence policies has played a significant role in a number of transformations in the Finnish policy. These include changes in the national position on the use of military force abroad, in the interpretation of non-alignment, and the division of power among the primary national foreign policy decision-makers.

In terms of trying to influence the European policies, Finland has invoked its non-alignment. The goal has been to influence the direction of EU defence policy so that Finland would not compromise its status as militarily non-aligned country.

The participation in the EU’s foreign, security and defence policies has also come to represent a means of self-identification. Finland’s identity as a small state has been replaced by a small member state identity. Due to this change, a common view has emerged according to which Finland is no longer a ”lonesome log” or ”a single piece of driftwood shooting alone the rapids of world politics”. Rather, Finland is viewed as tied into a raft of logs – a European raft – and floating more steadily and peacefully, as the mass of the common raft cushions and softens the blows and collisions of world politics.