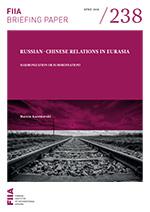 Russia and China have largely managed to avoid direct competition in the post-Soviet space, particularly in Central Asia, even though they have been pursuing distinct regional cooperation projects, namely the Eurasian Economic Union and the Silk Road Economic Belt.

China is more interested in the practical benefits of regional cooperation. It aims at preventing other powers from establishing closed politico-economic blocs. Russia is struggling to maintain the image of a strategic leader in Eurasia. Its concept of ‘Greater Eurasia’ imitates China’s project as Moscow wants to create the impression of Russia and China being equal partners in Eurasia.

Paradoxically, it is the asymmetry in Russian and Chinese visions of regionalism that has facilitated cooperation. On top of this, the implementation of the two regional projects has created a number of stakeholders in both states who are now in favour of closer cooperation. In the long-term perspective, however, subordination of the Russian project to the Chinese one is more plausible than genuine integration of the two initiatives.