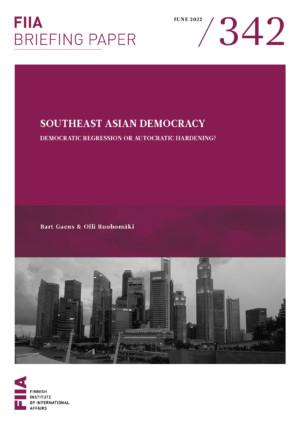 In line with a global trend, Southeast Asia faces an overall decline in levels of democracy, raising the question of whether democratic progress in the region has reached its limits.

Most member states of the Association of Southeast Asian Nations (ASEAN) have not seen a “wave of democratization” after a long period of authoritarianism and suppression. Instead, the region has been characterized by remarkably resilient “flawed” democracies and relatively stable autocratic regimes, in some cases in spite of strong economic growth and social development. Democracy, or rather autocracy with some democratic elements, has been ebbing and flowing.

Most Southeast Asian flawed democracies and autocracies alike are engaged in the politics of hedging, seeking cooperation with multiple partners. These include authoritarian China, which is not interested in the political systems of the countries it deals with, but also the US, the EU and Japan.

Pragmatism is inherent in the way ASEAN polities are managed. As long as living conditions improve or at least remain stable, there is little appetite for Western-style democracy that places participatory politics and human rights at the centre of societal development.

The geostrategic interests of external actors in Myanmar: A struggle for influence in a country in turmoil