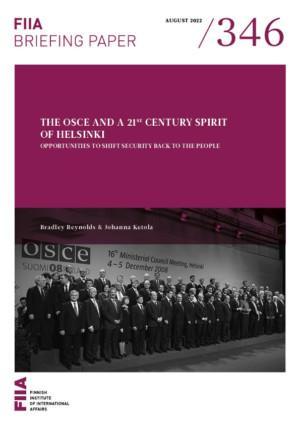 A common understanding of the OSCE and the security it seeks to promote has been in decline since 2008. The war in Ukraine and renewed Russian invasion in February 2022 have led many to ask how to sustain the OSCE going forward.

One consideration is to temporarily remodel the OSCE as a ‘consensus minus one’ organization to exclude Russia from decision-making. This would allow the institutional set-up and characteristics of a liberal world order institution to be maintained. Another perspective is the return to a Cold War conference model, which would facilitate dialogue with Russia and its allies despite Moscow’s active dismantling of the OSCE and its principles.

The immediate future for the OSCE looks dim. Ahead of the 50th anniversary of the Helsinki Final Act in 2025 and in preparation for the Finnish OSCE Chairpersonship, this Briefing Paper argues that the perspectives of civil society may help retain a key tenet of the OSCE process and help reimagine a new Helsinki spirit.

An expanded, interdimensional Moscow Mechanism may offer a via media between the two perspectives and continue to incorporate civil society perspectives into the operational work of the OSCE.

European politics in times of crisis: Developments in Germany, France and Italy, and consequences for the EU

A proposal for a new Western policy on the Russia-Ukraine conflict: re-position to de-escalate