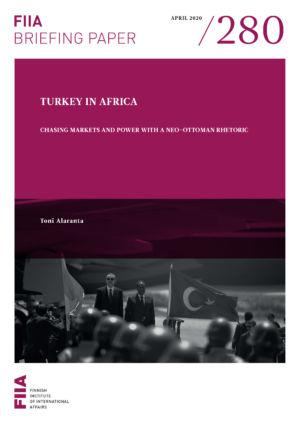 Turkey’s increasing activity in Africa is part of its new foreign policy doctrine within which Turkey is conceptualized as a global ‘order-producing’ country. The export-oriented companies supporting the AKP constantly seek new markets, and President Recep Tayyip Erdoğan wants to export his brand of Islamic-conservative ideology to other Muslim-majority countries.

Turkish government officials and NGOs emphasize the historical connections between the Ottoman state and the African target countries. Turkey currently plays a key role in the internal affairs of Libya and Somalia, upholding military bases and training programmes.

Turkey’s emphasis on humanitarian aid and equality, and the use of government-affiliated NGOs, have produced positive results, but the tendency to see Africa as a terrain for hegemonic power struggles against Egypt and Saudi Arabia is likely to generate negative reactions.