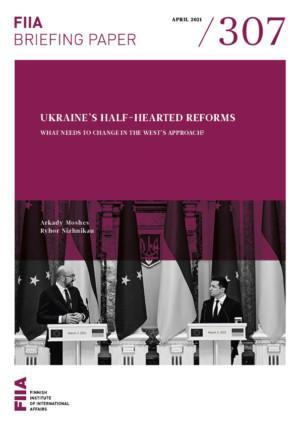 Comprehensive internal reforms, along with security cooperation, are a key pillar of West-Ukraine interaction. Thus far, however, the Western effort has not sufficed to overcome the resistance of the local elites and make the reforms irreversible.

High hopes raised by Volodymyr Zelensky’s election as Ukraine’s president in 2019 were short-lived. In three priority areas – anti-corruption, the judiciary and the economy – reforms have stalled. Instead, Zelensky has started to adapt the same socio-political system that the West aims to transform to his own political purposes.

Western support – or even leadership – is once again becoming crucial in keeping Ukraine on the reform track. Ongoing domestic developments seriously challenge Zelensky’s administration, creating a window of opportunity for a more successful application of reform conditionality. In turn, a new US administration may be much more capable of using this emerging opportunity than its predecessor.

If they are to promote reforms more efficiently, Western actors should go beyond the technocratic approach and recognize their own “ownership” of the process. Progress with reforms requires direct and high-level political engagement to enforce the implementation of agreements and to empower pro-reform forces inside the country.

China’s policy towards Belarus and Ukraine: A limited challenge to Sino-Russian relations