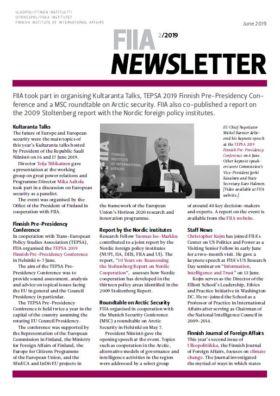 The future of Europe and European security were the main topics of this year’s Kultaranta talks hosted by President of the Republic Sauli Niinistö on 16 and 17 June 2019. Director Teija Tiilikainen gave a presentation at the working group on great power relations and Programme Director Mika Aaltola took part in a discussion on European security as a panelist.

The event was organised by the Office of the President of Finland in cooperation with FIIA.

Report by the Nordic institutes

Research Fellow Tuomas Iso-Markku contributed to a joint report by the Nordic foreign policy institutes (NUPI, IIA, DIIS, FIIA and UI). The report, “10 Years on: Reassessing the Stoltenberg Report on Nordic Cooperation“, assesses how Nordic cooperation has developed in the thirteen policy areas identified in the 2009 Stoltenberg Report.

FIIA organised in cooperation with the Munich Security Conference (MSC) a roundtable on Arctic Security in Helsinki on May 7. President Niinistö gave the opening speech at the event. Topics such as cooperation in the Arctic, alternative models of governance and intelligence activities in the region were addressed by a select group of around 40 key decision-makers and experts. A report on the event is available from the FIIA website.

Christopher Kojm has joined FIIA’s Center on US Politics and Power as a Visiting Senior Fellow in early June for a two-month visit. He gave a keynote speech at FIIA’s US Research Day seminar on “Information, Intelligence and Trust” on 13 June.

Kojm serves as the Director of the Elliott School’s Leadership, Ethics and Practice Initiative in Washington DC. He re-joined the School as a Professor of Practice in International Affairs after serving as Chairman of the National Intelligence Council in 2009-2014.

This year’s second issue of Ulkopolitiikka, the Finnish Journal of Foreign Affairs, focuses on climate change. The Journal investigated the myriad of ways in which states and companies deal with global warming. Some tackle the problem courageously, whereas others make things even worse by actively lobbying against the implementation of the Paris Agreement. China faces another serious long-term threat: its growth may stall due to water shortage issues.

The journal takes a critical look at the European Central Bank’s quantitative easing programmes that may seriously aggravate the next financial crisis, according to some experts. If the bubble bursts now, ECB may lack tools to mitigate it.

The Belarusian paradox: A country of today versus a president of the past
Arkady Moshes & Ryhor Nizhnikau

The Sinification of China: How the minorities are being merged into one nation
Jyrki Kallio

The Concepts of parliamentarism in the EU’s political system: Approaching the choice between two models
Teija Tiilikainen

Spanish election spurred on by fear of breakup: Winner must reckon with regional parties
Teemu Tammikko