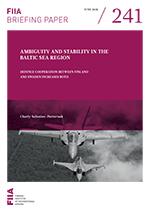 Defence cooperation between Finland and Sweden has created a ‘fleet-in-being’ effect across the Baltic Sea region, with mixed consequences for regional stability, and paradoxically both increasing and decreasing ambiguity at the same time. The implications of Swedish and Finnish security policy coordination for regional stability are clear: the current situation is strategically stable, but if Russia further destabilises it, Finland (and potentially Sweden) would seek a new equilibrium through a change in policies, possibly through joining NATO.

Sweden’s approach to solidarity and preparing to defend the country with others has decreased ambiguity, while Finland’s approach has both increased and decreased ambiguity for regional defence planners. Finland is increasingly transparent about tactical interoperability with Swedish and NATO member military forces, a trend which will increase as Finland prepares to participate in and host large international exercises. Yet, strategically Finland’s foreign policy elite collectively makes reserved statements which, in effect, increase regional ambiguity about Finland’s intentions in a crisis.

The defence of Finland and Sweden: Continuity and variance in strategy and public opinion