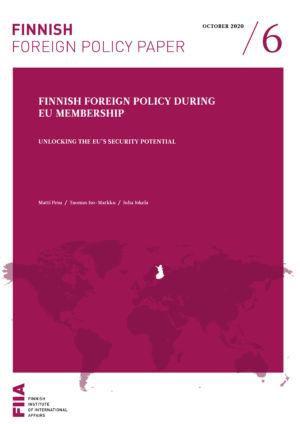 This FIIA Finnish Foreign Policy Paper looks at the evolution of Finnish foreign and security policy during the country’s 25 years as an EU member. The paper aims to trace how – and with what kind of consequences – Finnish foreign and security policy has interacted with EU foreign policy during the membership period. More specifically, the study examines the interlinkage between Finnish and EU foreign policy in relation to three different topics: the policy towards and relations with Russia, security and defence, and Finland’s broadening international agenda.

The paper argues that the Finnish policy vis-à-vis the three domains is marked by different patterns of continuity and change. However, the rise of a protective agenda in the Finnish policy towards Russia, Finland’s increased boldness in advancing the EU’s security and defence dimension, and the recent emphasis on the Union’s role as a bulwark against geo-economic threats all indicate that the EU’s role in enhancing Finnish security has become a top priority. Indeed, Finland is currently endeavouring to unlock the EU’s potential as a security community.

Towards an EU security community? Public opinion and the EU’s role as a security actor