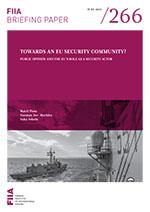 The EU’s ability to contribute to the security of its citizens forms a key part of a new emerging narrative for the Union. Finland is one of the advocates of increased EU activity in security and defence, frequently referring to the EU as a security community.

Existing data on public opinion suggest that citizens’ views provide building blocks for more potent EU action in security and defence matters and support for the idea of the EU security community.

EU citizens broadly share concerns related to terrorism and migration. The fear of armed conflict is low, however.

In general, EU citizens are disposed towards collective action by the EU in questions of foreign, security and defence policy. Support for the CFSP and CSDP has remained high and strikingly stable. Moreover, there seems to be a nascent sense of solidarity and unity among Europeans, which may facilitate the EU’s agency in these areas.

However, the EU should survey public attitudes on security-related questions in a more detailed fashion in order to gain a better grasp of the prevailing sentiments among EU citizens.