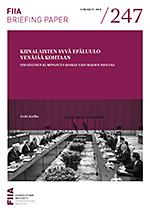 While China officially holds friendship with Russia in high regard, the Chinese people in general question Russia’s amicability and see the country as China’s biggest security threat. This distrust is rooted in the problematic history of relations between the two nations.

Knowledge about, and even interest towards Russia are minimal. In the eyes of the general public, Russia is still as chaotic as it was after the fall of the Soviet Union. Among the younger generation, however, Vladimir Putin is idolised as a strong leader, which China is deemed to lack.

According to Chinese researchers, the strategic partnership between China and Russia exists only in the rhetoric of the national leaders, and in reality it is manifested by sectoral coordination more than far-reaching cooperation. China and Russia share similar views regarding the threat of the United States as well as the need for stronger multipolarity in the international system, but this will not suffice to make them friends or allies.