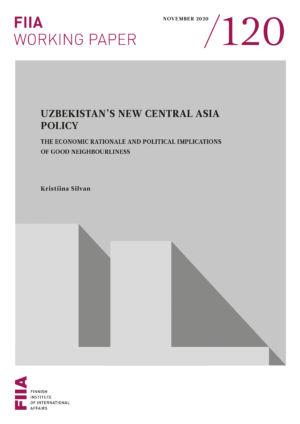 Under the leadership of President Shavkat Mirziyoyev, Uzbekistan has embarked on a moderate reform programme that aims to achieve socio-economic growth without undoing the country’s authoritarian political system. The programme has implications beyond Uzbekistan’s borders because it has changed the way Uzbekistani foreign policy is formulated and implemented. Uzbekistan’s former isolationist stance has shifted to a foreign policy opening, which is most noticeable in the improvement of its relations with its neighbours.

This Working Paper analyzes “good neighbourliness”, the key concept of Uzbekistan’s new Central Asia policy. It details the amendment of Uzbekistan’s bilateral relations with its neighbours and points to the positive reception of Uzbekistan’s new regional policy in Russia, China, and the West. The paper argues that while “good neighbourliness” is a pragmatic strategy rooted in economic rationality, the policy’s regional implications are substantial. It is laying the necessary foundation for sustainable Central Asian co-operation from within in a way that is acceptable to the Central Asian states and big non-regional actors alike.

Managed leadership succession in Kazakhstan: A model for gradual departure?