Several of FIIA researchers have taken part in public discussions both in Finland and abroad concerning Russia’s increased aggression towards Ukraine, providing background analysis and forward-looking assessments on the developments of the situation.
Read some of the comments by FIIA researchers in the media.
Follow FIIA-researchers on Twitter.

Here are some latest FIIA publications on the subject: 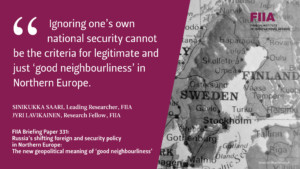 War in Ukraine: The European Union evolves as Putin attacks by Tyyne Karjalainen and Katariina Mustasilta
Russia’s shifting foreign and security policy in Northern Europe: The new geopolitical meaning of ‘good neighbourliness’ by Sinikukka Saari and Jyri Lavikainen.
Belarus’s constitutional referendum: Lukashenko has no reason for triumph by Arkady Moshes and Ryhor Nizhnikau
Central Bank Digital Currencies and the implications for the global financial infrastructure: The transformational potential of Russia’s digital rouble and China’s digital renminbi by Maria Shagina.

FIIA FORUM 2022: Changes and Challenges in the Nordic Security Climate

The FIIA Forum 2022 will be held on 27 April in co-operation with the Finnish Security and Intelligence Service (SUPO). The event will be live streamed. Please follow our website and social media channels for more information.

CUSPP will organize the 9th annual Summer Sessions on the 6-7th of June. The topic for this year is Transatlantic relations and the Baltic Sea region and there will be panels ranging from bilateral relations to global politics.

FIIA’s Research Fellow Kristiina Silvan defended her doctoral dissertation on government-supported youth activism in Belarus and Russia at the University of Helsinki on 25 February 2022.

Dr. Niklas Helwig has been awarded the title of Docent in International Relations (European Studies) at Tampere University.

Dr. Paul Belesky has joined FIIA as a Non-Resident Fellow. He has a PhD from the University of Queensland. His research interests among others are Geopolitics and economics in East Asia, China’s political economy and economic statecraft.

All FIIA publications are available on the FIIA website. Here you can find some of the latest publications.
The EU´s quest for geoeconomic power: Pursuing open strategic autonomy by Niklas Helwig and Mikael Wigell

Iraq’s state of democracy: A self-perpetuating cycle against reform in favour of the political elite by Mariette Hägglund

In his new book on Turkey’s foreign policy narratives FIIA Senior Research Fellow Toni Alaranta examines international and national historical processes and highlights narratives that describe Turkey and its position in world politics. The book covers topics such as Kemalist modernization, Islamic conservative views of the New World Order, Turkey’s relations with non-Western countries such as Russia and China, and Turkish narratives of the Syrian war and the COVID-19-pandemic.

The book is published by Springer, more information here.

The Finnish Journal of International Affairs has once again been shortlisted in key categories in the annual Edit-competition organized by the Finnish Magazine Media Association. The nominations are in the categories for Magazine of the Year (for general readership) and Feature Story of the Year, and sub editor Kaarina Vainio is nominated for Magazine Journalist of the Year. 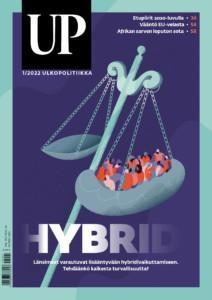 The latest issue of the Finnish Journal of International Affairs (1/2022) examines hybrid interference and expanding security threats. Western democracies are preparing for a conflict, in which authoritarian countries will take advantage of vulnerabilities in open economies and media spheres, and even migration is weaponized. Will democratic societies maintain their values?

Other topics covered in this issue include Russian notions of spheres of influence, transatlantic relations, challenges in crisis management and regional repercussions of the wars in Ethiopia and Afghanistan.